In order to fight against the unwanted behavior of certain players, Wolfy has implemented an automatic insult filter.How does it work?The insult filter is a system that will block certain words or expressions which have been judged offensive or undesirable during a Wolfy game.If a player uses a word blocked by that filter, they will receive a warning through an automatic message, and risks being banned if they repeat their action.The filter considers words placed in two categories:Minor Chat InfractionThis category concerns expressions used daily, but their primary meaning is offensive (for example, "idiot" or "shut up").At this stage, the robot considers the message as vulgar. It will prevent it from being sent and warn the player. 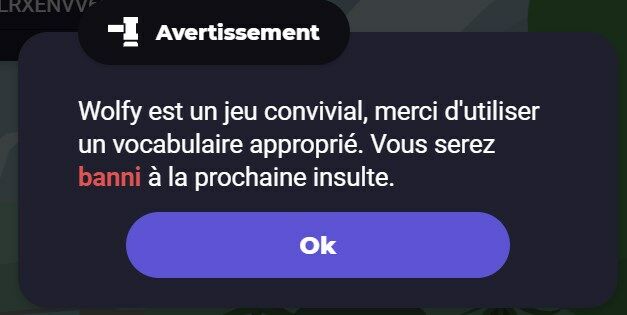 All attempts to bypass the insult filter will lead to a punishment of at least 24 hours.If you wish to add a word to the insult filter that isn't blocked, you can let us know.Read moreYou can refer to these guides to learn more about Wolfy:Appeal your punishmentContact WolfyReport a playerModeration on Wolfy