A player is causing problems and interfering with the game? Here's how to react!ReportsReports are the main tool against undesired behavior from players. It allows you to directly notify the moderation team while giving all the necessary details about the offense committed by the player.Reporting a playerThere are two ways to report a player according to your game environment:Through the websiteTo report a player, you simply need to pass your mouse over the players name (in the chat or on the game scene). A window will open and you'll be able to click on the "Report" button which is recognizable by it's red color and it's flag.

Once you've clicked on this button, you just need to select the offense committed by the player, write a short sentence explaining the problem in detail and then to confirm.

On a smartphoneIf you are playing on the mobile app, you just need to hold for a short moment on the message sent by the player causing problems. Once that is done, the report interface will show up on your screen. All you have to do after is to follow the steps on the screen.

All abusive reports are punishable by the moderation team.Behavior that can be reportedAnything that disturbs the usual gameplay can be reported: this concerns insults, cheating, unfair gameplay etc.To learn more: Punishable behaviorExclusion voteIn a case where a player voluntarily ruins the game for all of the players, and the players need immediate action, there is a solution.The exclusion vote is a system that allows players to remove a problematic player from the game. When to use it?The exclusion vote should only be used in case of major abuse from a player to the point of making the game un-playable.Here are some examples: Spamming messagesRepetitive trollingRepetitive insultsUsage of a soundboard during a voice gameUsage of a voice modifier during a voice gameHow to activate the exclusion vote?To do this you need to first report the player.Once you're on the report interface, you must activate the option "Propose an exclusion vote" on the bottom. 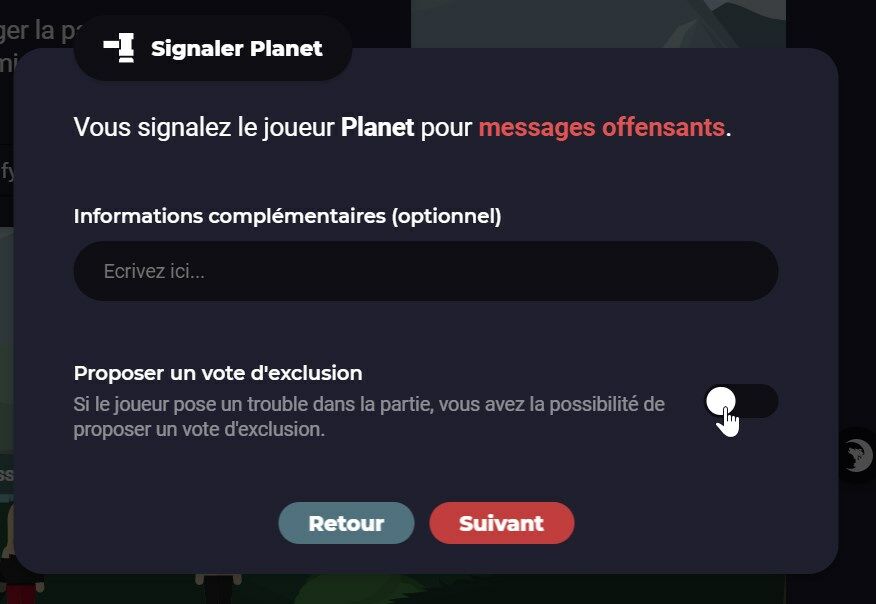 All abusive usage of the exclusion vote is severly punishable.The player has friends who refuse to remove him from the gameIf the player seems to have friends with him, it is possible that they do not wish to remove him from the game.In this case, it is possible to check the box "the player seems to be accompanied" and to specify the usernames of the accompanying players. Their votes will not be taken into account. 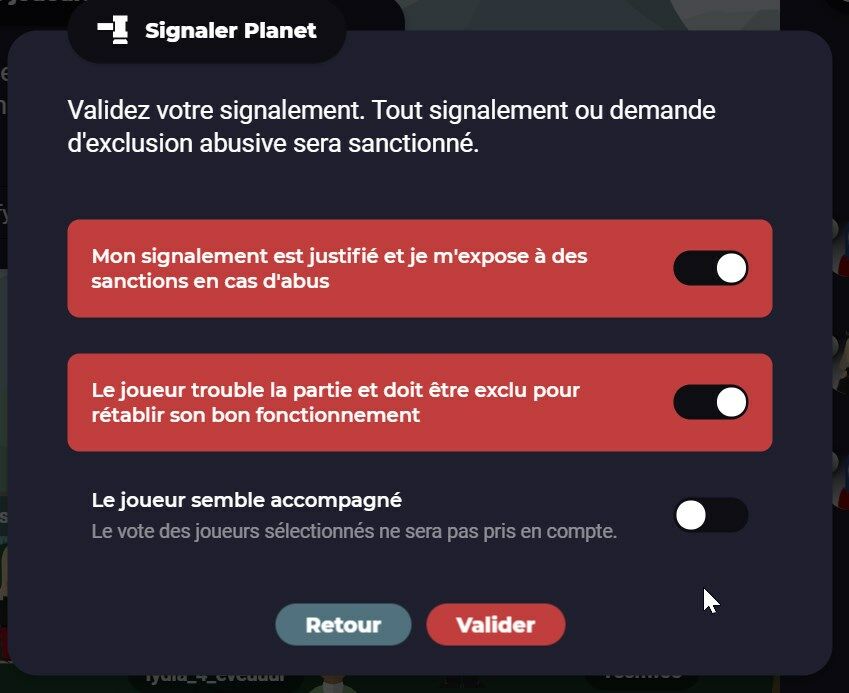 What then?After all this has been completed, the report will take a certain amount of time to be verified by the moderation team. If the report is justified, you will receive a notification on the Hub informing you that the player has been punished.

Learn moreYou can refer to this guide to learn more on Wolfy: Wolfy in gameFirst stepsModeration on WolfyPunishable behavior